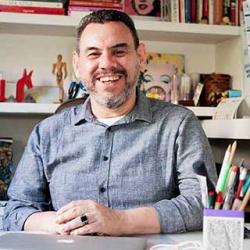 I am a Brazilian freelance graphic and web designer, focused on front-end template development for Joomla CMS, consulting and I love contributing to open source projects.

I started using Mambo and decided to switch to Joomla when it was created in 2005. From the beginning I realized the best way to learn more about the CMS was attending to events. As I increased my knowledge on Joomla I started giving presentations and training sessions in different partas of Brazil, United States and Germany. I have introduced Joomla to several major educational institutions in Rio de Janeiro and some parts of the Brazilian entrepreneurship eco-system. As a volunteer, I started as an illustrator to the Joomla Community Magazine. There I also had the opportunity to write articles in english and Portuguese. As a translator, I have been working with the Core Translation Team since the release of version 3.4 and I have been helping translate the J!Docs. As a graphic designer I was responsible for creating the visual identity of: - Joomla User Group Rio de Janeiro - Joomla User Group Caribbean - JoomlaDay Rio de Janeiro 2013 - JoomlaDay Ribeirão Preto 2015 - Joomla Social Networks imagery (Facebook, Twitter, G+ etc.) In 2015 I co-organized Joomla Day Ribeirão Preto in the state of Sao Paulo, Brasil. Currently I am involved with the following teams: - Marketing Team - User Groups Team - Accessible admin template working group - Joomla Design Team In Rio de Janeiro, I'm one of the organizers of Joomla User Group caRIOca, focused on promoting Joomla in the city. Recently I became the leader of the Brazilian Portuguese Joomla Core Translation Team.