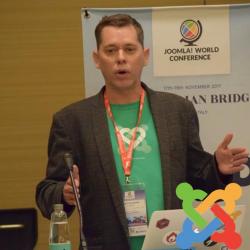 Jason Nickerson has 20 years of experience in the web industry, from e-commerce to web development, to content management and web hosting. An Open Source Evangelist and a past Board Member of Open Source Matters / Joomla, he has shared his love of Open Source worldwide. Jason's work with the Open Source Joomla community lead him to the hosting sector working on the cPanel Marketing Team and as cPanel's Primary Community Event Planner. Jason is currently an Open Source Consultant for Cloud Hosting Companies.

My story starts back in the early ’80s with some of the first desktop computers and a modem. I first saw the best of what an online community could be by visiting online BBS’s and eventually running my own BBS. By my 20’s, my focus had changed to music.

In the 2000’s I focused on music production and then came full circle in 2003 with an online electronic / DJ-based record label. The record label forced me to learn web design, HTML, and PHP. An online record label was a revolutionary idea, but iTunes soon changed everything. My focus quickly turned from music to web development.

In 2007, I found Joomla. Already an experienced web designer, I needed to finish a project dragging on for months and decided to do a Google search for a quick solution. I then discovered Joomla!, this one search changed my life forever, and I had no idea what was about to happen.

In 2008 I decided to leave client work behind and create a Joomla Template and Extension club and called upon the most talented people I knew and formed joomlaxtc.com. My past websites and e-commerce experience told me not to expect much. Still, thanks in part to the Joomla Extension Directory within the first month online, Joomlaxtc was more successful than any of my online ventures combined. By 2010, Joomlaxtc was one of the top providers for Joomla Templates and Extensions.

In 2014 I began giving back to the community by forming and Tampa Joomla User Group and speaking at Joomla events, including JoomlaDay Boston, JoomlaDay Minnesota, JoomlaDay Chicago, and even the first Joomler to talk at WordCamp Miami.

By 2016 I was the organizer of JoomlaDay Florida. My participation has also seen me working the Joomla expo booth at many hosting and web conferences worldwide. As a previous Site Showcase team member, I was nominated for secretary of the OSM board in 2017, became the Capital Team Lead in 2018, and concluded as part of OSM as Legal and Finance director. I am a Joomler, and this is how Joomla changed my life.