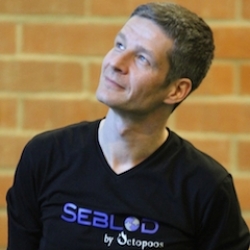 Sebastien Lapoux is the founder and CEO of Octopoos, a French Internet Services company specializes in Joomla and founded in 2008.

Octopoos is the editor of SEBLOD: a software on Joomla to answer the specific needs of your customers faster than ever. It complements Joomla by providing professional features for high-end websites.

Sebastien Lapoux is involved into Joomla since 2008: