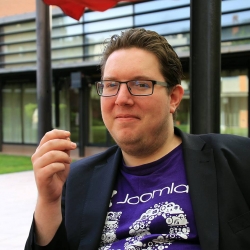 We are currently finalizing the roadmap:

We have currently 4 testing project ideas in the pool:1.) JavaScript Tests for Joomla 42.) Testing Dashboard

3.) Improvements and extended coverage for the parallel testing environment

The migration to Chrome and Selenium Server 3 is ongoing.

Weblinks 3.6 will be released today.

No updates on dev branch. TA working on container-test, but basically I'm working on fine tuning it to get the full set of functionalities that Weblinks has right now, part of it following Jelle's job for the Joomla specific tests.

(36000 downloads) about 1500 more than last meeting.JK updated selenium to 3.2.0 and the IE webdrivers. New release 3.2. Next version 3.3 is coming soon (Already happened at the time writing)

TA / NB: Currently there is a working set of a single container-based tests for weblinks, using that container-test branch spread through the joomla-testing and weblinks repositoriesand also Niels' virtualisation repository, which is on the works for creating a whole virtual environment for Joomla testing. TA goal for this month is to get the first test to actually run more than one container through the newly testing coordinator (which we talked about in Munich) so then it can be plugged into Niels' virtualisation for automating the environmentRD and YH: Drone 0.5 running since some weeks stable for parts of the core tests (JS + phpcs).. More to come.

YH: Started organizing and updating the documentation on the automated testing team.

Weblinks no updates
9. Tests in Joomla! Core / 4Unit testing sub team still working on an overview for the tests.

NB: Work on Joomla! X is currently on hold, until we get a decision from PLT regarding its future.

No updates after the latest merges.

There are open tasks for writing Joomla! System tests:https://github.com/joomla-projects/gsoc16_browser-automated-tests/issues/17https://github.com/joomla-projects/gsoc16_browser-automated-tests/issues/16Tasks for Web LinksWe have a big issue with smart search tests, which make Travis fail.

Tasks for Joomla-BrowserThere are multiple open PRs which need help testing. In general a new architecture and clean up is needed.Tasks for Selenium- Testing and Extending the selenium.php file we supply Tasks for JoRobo- Build system for Joomla core itself (replace Phing scripts, add minifying of JS / CSS, XML replacements, many other nice features. Talk with @rdeutz and joomla-cms maintenance team)